The 'Y' - or Wireless Intercept - Services have a history almost as long as that of radio itself. From the time that man began to benefit from radio it was appreciated by intelligence agencies that rich pickings were to be had from the interception and exploitation of foreign broadcasts. This was particularly true of those serving military and diplomatic communications. 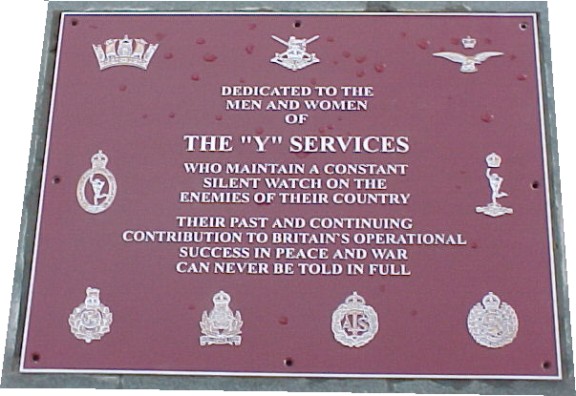 Structured military activity to exploit the communications of hostile, or potentially hostile, powers really came of age around the time of the First World War. It played an important part in naval strategy and it was the British Royal Navy that led many developments. Information that could never have been divulged or publicly discussed at the time makes it clear that British naval victory at the Battle of Jutland, and elsewhere, owed much to Wireless Intercept successes. By the time of the Second World War the contribution of the Forces had become an essential component of the overall intelligence effort. At the peak of the secret, wartime campaign many thousands of men and women, from the Royal Navy, the Army and the Royal Air Force were engaged in demanding duties, which for many years they could discuss with only those who had shared their secret labours. Allied interception work occurred on all fronts, with strategic collection concentrated on a network of major, static sites and tactical work dependent on a variety of mobile and semi-permanent assets.

The work of the RAF 'Y' Service is well described by Aileen Clayton in her 1980 book, 'The Enemy is Listening'. This explains in some detail, but in a captivating and easily readable fashion, how great was the contribution of 'Y' material to success in the Battle of Britain - and other aerial conflicts throughout the Second World War. You can found out more about the book in our Bibliography section.

The veil of secrecy that had prevailed for several decades began to lift in the 1960s. A number of books were published describing the Allied struggle to break the codes produced by the ingenious, German, cipher machine known as Enigma. Finally, during this dynamic decade, the existence of ULTRA, the Top Secret product delivered by British codebreakers was finally admitted. Most importantly, the essential contribution of those who intercepted the vital transmissions, providing the raw material for code-breaking work, was also acknowledged.

Because of the sensitivity of the work involved, and its particularly demanding nature, an especial bond, and a strong sense of identity and common purpose, grew up amongst 'Y' workers. This remains a feature of Y Service life today. Servicemen and women are still engaged in work that can be linked to wartime activities, though nowadays in considerably smaller numbers and in the less sinister world of overt electronic warfare supporting military operations, often in a peacekeeping or peace support context.